Exactly six years later, the postage rate was reduced to three cents when New York Senator Daniel S. Dickinson fathered legislation that simultaneously initiated coinage of the tiny silver three-cent piece as a public convenience. The large cents then in circulation were cumbersome and unpopular, and the new denomination was designed to facilitate the purchase of stamps without using the hated “coppers.”

This reasoning was carried a step further when the Mint Act of February 21, 1853 authorized a three-dollar gold coin. Congress and Mint Director Robert Maskell Patterson were convinced that the new coin would speed purchases of three-cent stamps by the sheet and of the silver three-cent coins in roll quantities. Unfortunately, at no time during the 35-year span of this denomination did public demand justify these hopes.

Chief Engraver James Barton Longacre chose an “Indian Princess” for his obverse—not a Native American profile, but actually a profile modeled after the Greco-Roman Venus Accroupie statue then in a Philadelphia museum. Longacre used this distinctive sharp-nosed profile on his gold dollar of 1849 and would employ it again on the Indian Head cent of 1859.

On the three-dollar coin Liberty is wearing a feathered headdress of equal-sized plumes with a band bearing LIBERTY in raised letters. She’s surrounded by the inscription UNITED STATES OF AMERICA. Such a headdress dates back to the earliest known drawings of American Indians—French artist Jacques le Moyne du Morgue’s sketches of the Florida Timucua tribe who lived near the tragic French colony of Fort Caroline in 1562. It was accepted by engravers and medalists of the day as the design shorthand for “America.”

Longacre’s reverse depicted a wreath of tobacco, wheat, corn and cotton with a plant at top bearing two conical seed masses. The original wax models of this wreath still exist on brass discs in a Midwestern collection and show how meticulous Longacre was in preparing his design. Encircled by the wreath is the denomination 3 DOLLARS and the date. There are two boldly different reverse types, the small DOLLARS appearing only in 1854 and the large DOLLARS on coins of 1855-89.

Many dates show bold “outlining” of letters and devices, resembling a double strike but probably the result of excessive forcing of the design punches into the die steel, causing a hint of their sloping “shoulders” to appear as part of the coin’s design. So common is this phenomenon on United States coins of the mid-19th century that it has acquired the name “Longacre doubling.”

Every U.S. denomination boasts a number of major rarities. The three-dollar gold coinage of 1854-1889 is studded with so many low-mintage dates that the entire series may fairly be called rare. In mint state 1878 is the most common date, followed by the 1879, 1888, 1854, 1889 and 1874 issues. Every other date is very rare in high grade, particularly 1858, 1865, 1873 Closed 3 and all the San Francisco issues. Minuscule mintages were the rule in the later years. Proof coins prior to 1859 are extremely rare and more difficult to find than the proof-only issues of 1873 Open 3, 1875 and 1876, but many dates are even rarer in the higher mint state grades. This is because at least some proofs were saved by well- heeled collectors, while few collectors showed any interest in higher-grade business strikes of gold coins. Counterfeits are known for many dates; any suspicious piece should be authenticated.

The rarest date of all is the unique 1870-S, of which only one example was struck for inclusion in the new Mint’s cornerstone. Either the coin escaped, or a second was struck as a pocket piece for San Francisco Mint Coiner J. B. Harmstead. In any event, one coin showing traces of jewelry use surfaced in the numismatic market in 1907, and it was sold to prominent collector William H. Woodin. When Thomas L. Elder sold the Woodin collection in 1911, the coin went to Baltimore’s Waldo C. Newcomer. Later owned by Virgil Brand, it was next sold by Ted and Carl Brandts of Ohio’s Celina Coin Co. and Stack’s of New York to Louis C. Eliasberg in 1946 for $11,500. In Bowers and Ruddy’s October 1982 sale of the Eliasberg Collection, this famous coin sold for a then-record $687,500.

The three-dollar denomination quietly expired in 1889 along with the gold dollar and nickel three-cent piece. America’s coinage was certainly more prosaic without this odd denomination gold piece, but its future popularity with collectors would vastly outstrip the lukewarm public reception it enjoyed during its circulating life.

Very few mint state examples survive of any but the handful of relatively common dates noted above. Most three-dollar pieces are found in the grades of Very Fine or Extremely Fine, many of them damaged from use as jewelry. Quite a few were fashioned into “love tokens.” This involved planing off one side of the coin, typically the reverse, and inscribing a message or sentiment of some kind in its place. The popularity of such mementos peaked during the 1880s, and numerous gold dollars, quarter eagles and three-dollar pieces succumbed to this folk art.

As there’s quite a difference in value between mint state examples of the three-dollar piece and those exhibiting some wear, careful grading of these coins is critical. The high points of the obverse design that first show wear are the cheek and hair above the eye; on the reverse, check the bow knot and leaves. Also, always look carefully at any uncertified specimens, as these may have been repaired to disguise old mountings or other signs of jewelry use. 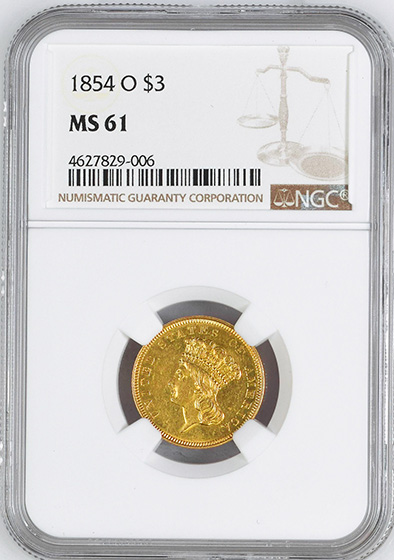 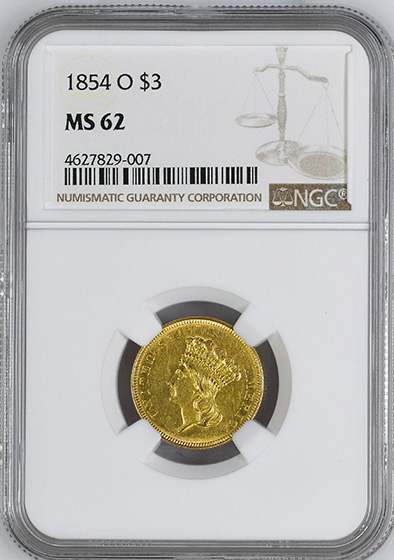 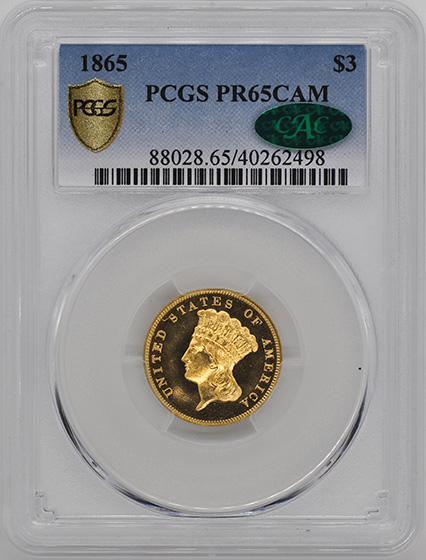 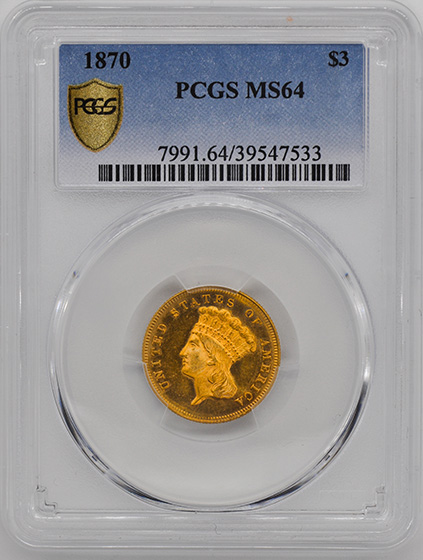 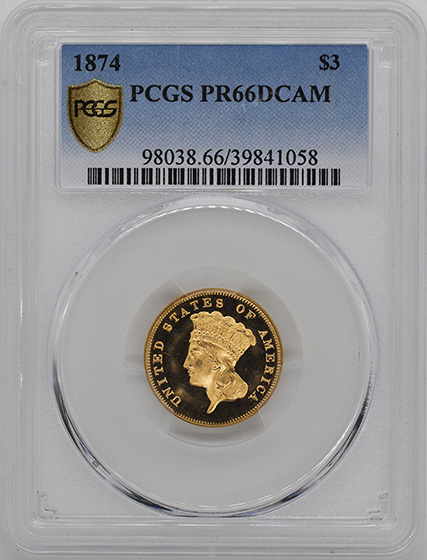 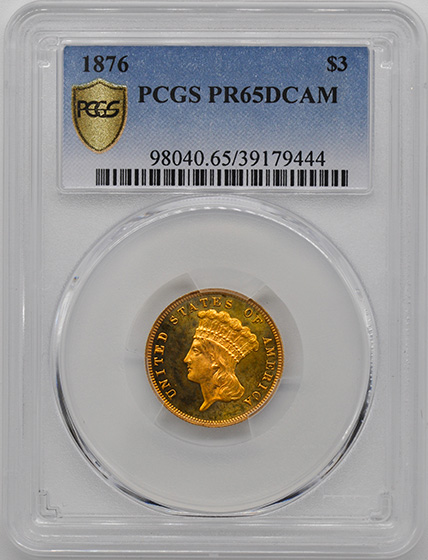 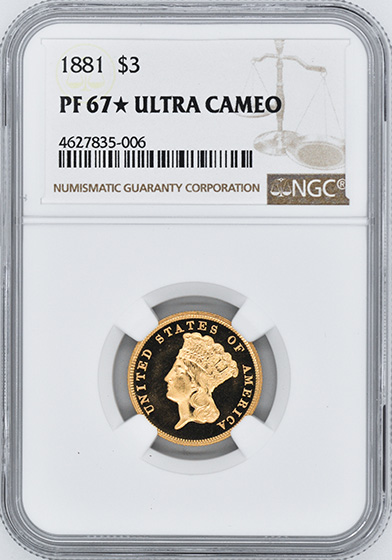 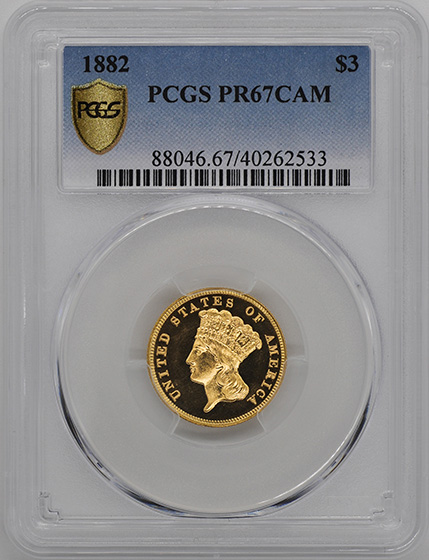 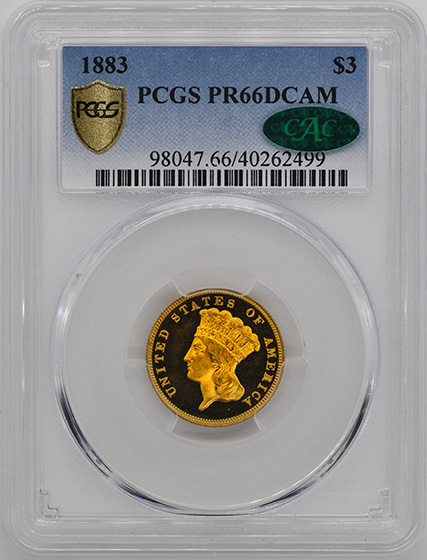 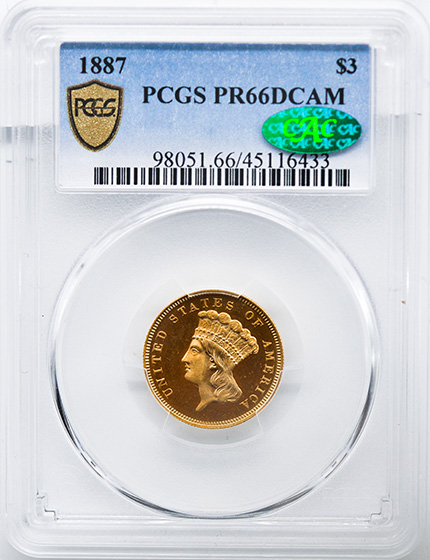 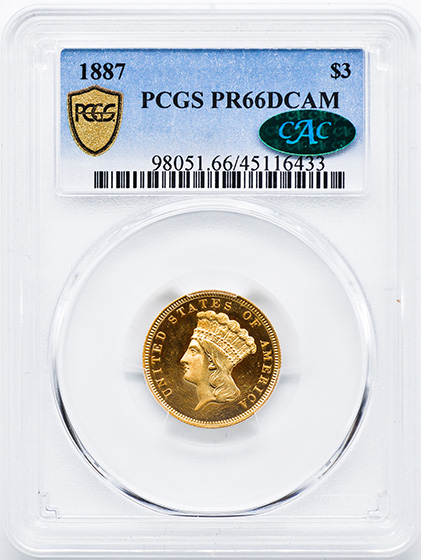